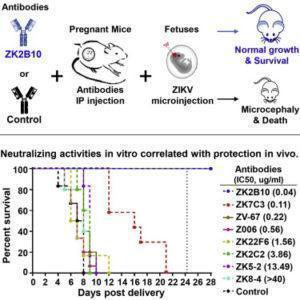 The emergent strain of Zika virus (ZIKV) that caused the 2015-16 outbreak in the Americas, is more virulent than the ZIKV first identified in Uganda. One of the most notable clinical anomalies observed in the most recent ZIKV outbreak is microcephaly and congenital defects in infants born to ZIKV-infected mothers. This has prompted research that aims at understanding as well as preventing ZIKV induced pathology in infants born from ZIKV infected mothers.

Li et al., used an experimental mouse-model of ZIKV infection and microcephaly to test the prophylactic and therapeutic potential of 6 monoclonal antibodies (mAbs). All 6 mAbs were derived from B cells isolated from one person at different stages of ZIKV infection (Yu et al., 2017). The study highlighted here aimed to determine the effect these antibodies had on ZIKV viral load and pathology in vivo.

Of the six mAbs tested, only two (ZK2B10 and ZK7C3) mAbs resulted in reduced neuropathology and low viral load in the blood and brain. ZK2B10 and ZK7C3 mAbs were derived from blood samples isolated 106 days post ZIKV-symptoms, and have been shown to have superior neutralising potential compared with the other 4 mAb isolates. ZK2B10 was the only mAbs that resulted in a 100% survival of mice pups. Researchers also showed that therapeutic administration of ZK2B10 in mice pups resulted in partial reduction of neuropathology and viral load compared to untreated mice.

In summary this study highlighted the importance of testing Abs derived from different stages of ZIKV infection. Additionally, their ZIKV-infection and microcephaly mouse model demonstrated utility in measuring  neuropathologies similar to those observed in humans, thus is an ideal experimental model for studying neuropathology due to ZIKV.