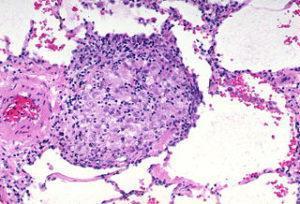 Tuberculosis (TB) caused by Mycobacterium tuberculosis (Mtb) is a significant problem, annually causing 1.7 million deaths worldwide. Although a significant proportion of the world population is estimated to be infected with the bacteria, an overwhelming majority remain asymptomatic in a state of latency. Asymptomatic M.tb infection is thought to be due to immune responses suspected to be primarily mediated by T cells that interact with macrophages that ingest Mtb to restrict the growth and spread of Mtb. A Th1 cytokine profile is classically associated with granuloma formation and TNF-α and IFN-γ act in synergy in the formation and maintenance of the granuloma. However, increased Th1 cytokine responses can be also be observed in TB patients. Immunosuppressive states including the use of immuneregulatory therapeutic agents have the potential to cause reactivation of Mtb infection. The studies carried out by Silva et al seek to determine the effect TNF-α blocking monoclonal antibodies (eg Infliximab) that have had significant therapeutic effect in the treatment of patients with chronic inflammatory diseases such as rheumatoid arteritis, on potential risk of reactivation of asymptomatic TB.

The authors used an in vitro model of granuloma with Bacillus Calmette-Guérin (BCG) antigen conjugated polyacrylamide beads cultured in the presence of peripheral blood mononuclear cells (PBMC) derived from either patients who had active TB , those who had completed treatment and healthy individuals with positive PPD responses as controls. They found that the addition of Infliximab in cultures significantly blocked TNF-α production and led to significant changes in the structure of granulomas formed using PBMC donors who had completed anti-TB treatment. Additionally, there was a significant reduction in the levels of IFN-γ, IL-12p40, IL-10 and IL-17 after TNF-α blockade in the three experimental groups. These observations, although confined to an in vitro system, clearly demonstrated that TNF-α blockade with Infliximab could directly influence the structure of granuloma and modulate the production of Th1, Th17 and regulatory T cytokines.

Since down regulation of TNF-α, IFN-γ, IL-10, IL-12p40, IL-17 could reactivate Mtb infection, those patients requiring therapy for chronic inflammatory disease with Infliximab or other TNF-α blockers, should require mandatory screening for latent tuberculosis prior to the use of immunobiologics such as TNF-α blockers.