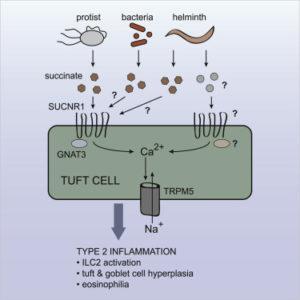 Tuft cells are the main initiators of type 2 innate responses, which are important for clearance of pathogenic helminths and protists.  However, how this response is initiated by tuft cells is not fully understood. Studies have suggested that tuft cells are activated via a chemosensing pathway, similar to one that mediates taste sensation.

A study conduted by Nadjsombati et al., aimed to determine how tuft cells are activated in the small intestines. Transcriptional profiling revealed that the extracellular receptor for succinate, Sucnr1, is highly expressed by tuft cells from the small intestine. Researchers demonstrated that oral administration (in water) of succinate and not other short chain fatty acids induced tuft cell hyperplasia, as well as type 2 innate responses, that were associated with accelerated clearance of N.brasiliensis. This suggested that succinate is an innate immune ligand that sufficiently to induces type 2 innate responses. This is a surprising finding as succinate has been predominantly linked to induction of type 1 immunity.

Succinate and other short chain fatty acids are produced by helminths, protists and bacteria during anaerobic conditions. Since succinate is capable of inducing responses canonical of anti-helminthic immunity, researchers aimed to determine if succinate sensing plays a role in inducing anti-helminthic immunity. Surprisingly, they observed that though tuft cell induction of type 2 responses against T.rainer was SUNCR1 dependent, this was not the case for N.brasiliensis.

In summary, this study has highlighted the role of succinate sensing by tuft cells in the induction of type 2 innate responses in the intestine against. Mocrobes. This finding has the potential to impact the understanding of intestinal immunity and homeostasis, as well as potential role of succinate as a therapeutic.