Fatal SFTSV is associated with defective B cell responses 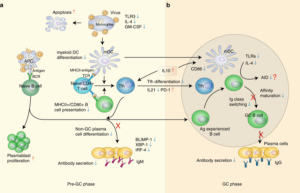 Schematic presentation of the mechanisms in the defective humoral response to SFTSV infection. a In the pre-germinal center (pre-GC) phase, persistent viremia primes large quantity of naive B cells into PBs and causes massive monocytic apoptosis, resulting in impaired mDC differentiation, accompanied by the downregulation of TLR3, IL-4 and GM-CSF. Due to insufficient MHC-II antigen presentation by mDCs and B cells, the differentiation and function of Tfh are inhibited, characterized by the decreased numbers and downregulation of IL-21 secretion. Additionally, the expression of PD-1 on Tfh, which act as an important inhibitory molecule of T-cell function, was observed to be persistently upregulated in deceased patients. The expression of three key transcriptional factors, BLIMP-1, IRF-4 and XBP-1, was down-modulated due to the lack of Tfh stimulation. PBs failed to differentiate into non-GC plasma cells and were unable to secret IgM antibodies. b In the GC phase, Ag-experienced B cells interact with cognate Tfh and mDC. However, the B-cell maturation is impaired due to the dysfunction of cognate Tfh and mDC, which, together with the downregulation of TLRs and IL-4, inhibited the induction of activation-induced cytidine deaminase (AID), resulting in the complete inhibition of immunoglobulin class-switch in the deceased patients. Red upward arrow and blue downward arrow denote up and downregulation, respectively. (Source Song et al., 2018. Nat Comm. )

Severe Fever with Thrombocytopenia Syndrome (SFTS) is an emerging infectious disease with a 10-30% fatality rate. SFTS is caused by Phlebovirus (also referred to as SFTSV) and is predominantly transmitted by ticks, however human to human transmission has been reported. Pathogenesis of SFTSV infection is poorly understood, as a result no effective therapy or vaccine exists.

Recently, studies have shown that SFTSV infects monocytes, impedes differentiation of dendritic cells, and interferes with signaling pathways in innate immunity. Thus, suggesting that SFTSV interferes with professional antigen presentation, which could lead to defects in the humoral responses. Researchers from Nanjing University Medical School and Y-Clone BioMedical, Ltd (China), aimed to characterize B cell dependent immunity during SFTSV infection, and its role in pathogenesis.

Further humoral immunity profiling showed that SFTSV fatal infections were associated with higher proportions of dysfunctional plasmablasts, that lacked expression of IgM and IgG. Additionally, lower expression of HLA-DR and CD80 on memory and marginal-zone B cells was detected in fatal cases compared with convalescent cases. Song et al., also showed that fatal SFTS cases had significantly higher level of IL-10, and lower levels of IL-4 and GM-CSF than individuals recovered SFTSV infections. This immune profile is associated with suppression of germinal center formation and MHC-II expression, and prevention of differentiation and maturation of dendritic cells, respectively.

In summary, the study demonstrates how the microenvironment required for induction of functional humoral immunity is not achieved during severe and fatal SFTSV infection. Additionally, it also shows the importance of NP- and/or Gn-specific in control of viral pathogenesis.