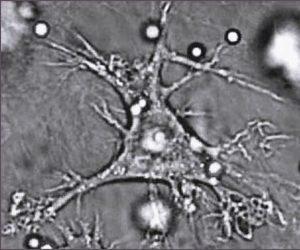 Dendritic cells (DCs) are known as professional antigen-presenting cells, for their essential role in linking innate and adaptive immune response. There are two major cell DC populations plasmacytoid and conventional DCs (cDCs). Currently we know that cDCs can be subdivided into cDC1 and cDC2, which have been reported to take part in  pro-inflammatory and anti-inflammatory immune responses, respectively.

The identification and function of cDCs is mainly allowed by the expression of different membrane receptors; including a notable and popular C-type lectin receptor is DEC205. DEC205 plays a very important role in antigen presentation and cross-presentation by cDCs. This has led to the study of antigen-targeting of DEC205 for vaccination. The lack of commercial porcine specific antibodies, has led to the identification of some of the cDCs markers, like FLT3 that determines the bona fide cDCs, through the analysis of transcript expression.

Porcine cDCs have been identify in lungs, skin, blood, and now lymph tissues. The cDC1 and cDC2 subtype were characterized by multicolor flow cytometry in porcine spleen, tonsil, submaxillary and mesenteric lymph tissues. Following the exclusion of B (CD21+) and T (CD3+) cells, as well as potential macrophages (CD163+), cDC1 were defined as MHCIIhighCADM1highCD172a-/low, and cDC2 as MHCIIhighCADM1highCD172a+ in all tissues. The identity of cDCs was confirmed by the expression of FLT3, whereas the correct subtype selection was also confirmed by the expression of XCR1 (cDC1) and FCeR1α (cDC2). The spleen had the highest percentage of total cDCs; however, the tissue with the maximum expression of DEC205 was tonsil. In general all tissues showed a higher proportion of cDC1 when the two subtypes were analyzed. This may indicate that on porcine lymph tissues the most common response is the pro-inflammatory one. Both subtypes had DEC205 positive and negative cells.

This study established the identification of cDC1 and cDC2 on porcine lymphoid tissues; this with the evaluation of the expression of DEC205, will facilitate the study of the function of cDCs against different pathogens.