Cancer Immunotherapy is associated with changes in innate immunity 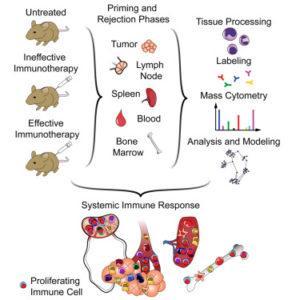 In the 19th century, Doctor William Coley noticed that sarcoma patients went into remission after contracting streptococcus infections. He injected them with streptococcus sp., thinking the bacteria was responsible for clearance of cancer. However, the bacteria induced a strong immune response which resulted in killing cancerous cells.

Using Dr. Coley’s idea of boosting the immune system, researchers developed immunotherapy: training the immune system to destroy cancer cells. One example of this is, using monoclonal antibodies (Ab) that target a specific cancer molecule. A monoclonal Ab, referred as a checkpoint inhibitor, prevents suppression of the immune cells, which occurs in cancer patients. Other immunotherapeutic strategies include; use of dendritic cells, adoptive and engineered T cells and blocking Ab against the suppressive receptors.

The advantage of immunotherapies is the memory created, which may prevent recurrence of the cancer. Effective anti-tumor immunity remains unclear. It has been reported that a number of cancer patients remain unresponsive to immunotherapies, therefore more research is required in this area.

Majority of cancer immunotherapies target local immune responses in the tumor’s microenvironment. Combination of tumor binding Ab and adjuvants that stimulate dendritic cells have shown to stimulate very strong T cell immune responses, which has been effective against certain cancers such as Lewis lung and 4T1 breast carcinoma.

Research done by Spitzer, et al., 2017 showed that a combination of tumor-binding IgG, anti-CD40 antibody and IFN-γ have shown to shrink tumor cells in mice models. Addition of IFN-γ to immunotherapy resulted in an increase in macrophage frequency; and increased expression of immunosuppressive co-receptor programmed death ligand 1 (PD-L1), plasmacytoid dendritic cell antigen 1, cell activation (CD86) and enhanced antigen presentation (MHCII). A population of dendritic cells induced during the priming stage of immunotherapy expressed the same receptors as the macrophages, however this population reduced in tumors after the treatment, potentially due to migration.

Increased expression of CD11b killer cell lectin-like receptor G1 (KLRG1) by Natural killer cells was observed. In accordance with other studies, high levels of CD4 and CD8 T cells, and FoxP3+ regulatory T cells was reported. High proliferation in many immune types within the tumor, spleen and across the system was observed at the priming stage after treatment. This proliferation was observed in the periphery even when the cells in the tumor returned to the cell division base line.  High levels of activated B cells expressing IgM, CD44, CD86 and MHCII was detected, however low levels of IgD was present. It was proposed that T cells from the blood can be successfully used to mediate tumor rejection as local activation of tumor-infiltrating leukocytes is not sufficient to reject the tumor.

In summary, this research emphasised that effective immunotherapy not only involves T cells but a complex network of other immune cells especially the dendritic, macrophages and NK cells. Therefore a strong systemic immune response is required for tumor rejection and systemic cell proliferative response can be used to monitor the immunotherapy.