Can testosterone regulate B cell numbers? 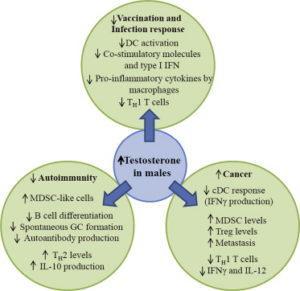 Sex steroids are known to have great effects on the immune system. Females are known to induce stronger immune responses to vaccination than males. Furthermore, Studies have shown that the prevalence of autoimmune disorders such as rheumatoid arthritis and systemic lupus erythematosus are less prevalent in males compared to females. Androgen deficiency due to hypopituitarism or Klinefelter’s syndrome (males with two X chromosomes) has been associated with increased risk of lupus. Interestingly, clinical remission has been observed in individuals undergoing testosterone replacement therapy. Further suggesting a role of testosterone in immune modulation.

A study conducted in Stanford published in PNAS 2014,  showed that men with low testosterone levels induced flu vaccine antibodies at similar levels as females and significantly higher than those observed in males with high testosterone levels. This suggests an immunomodulatory role of testosterone on B cell immunity. Additionally, males with Klinefelter’s syndrome have high B cell counts, which are lowered by testosterone replace therapy.

In summary, this study demonstrates a novel regulation of BAFF by testosterone. It also highlights the need for further studies that determine if this mechanism plays a role in the sexual dimorphism of autoimmune diseases.