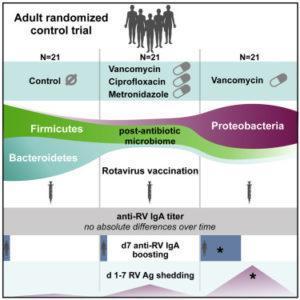 Rotavirus is the leading cause of severe gastroenteritis in children under 5 years old. Over the past decade introduction of the Rotavirus vaccines (RVV) has decreased the global burden of rotavirus. However, variable efficacy and effectiveness has been observed between high and low income countries, where vaccination protects approximately 95% and 50% of infants, respectively. One of the hypotheses suggested to explain the difference in rotavirus vaccine effectiveness is differences in the intestinal microbiome. A case-control study conducted in Ghana demonstrated that proteobacteria correlates with increased rotavirus-specific IgA. While another observed no significant difference in the gut microbiome between RVV responders and non-responders, however researchers observed that Bacteroides sp. correlate with low rotavirus-specific IgA.

Harris et al., designed a proof-of concept clinical trial that aimed to determine if mimicking some of the bacterial phenotypes observed in the observational studies is associated with improved RVV-induced immune responses. The trial had three arms where individuals that were either given a-7 day course of (I)vancomycin, (ii) broad-spectrum antibiotics (vancomycin, ciprofloxacin, and metronidazole) or (iii) placebo, followed by rotavirus (and tetanus) vaccination. Vancomycin treatment specifically depletes bacteriodetes while increasing proteobacteria, where as broad-spectrum antibiotic treatment results in an overall depletion of the microbiome in a taxa indiscriminate manner.

Researchers observed transient boosting of rotavirus-specific IgA titres at day 7 post-vaccination in the Vancomycin-treated arm compared to broad-spectrum antibiotic treated and placebo arms. However, by day 14 rotavirus-specific IgA responses were similar in all trial arms. RV viral shedding was observed at higher proportions in antibiotic treated individuals compared to placebo, and was not associated with levels rotavirus-specific IgA titres. Finally, they observed differential impact of antibiotic treatment on the micriobiome when the two antibiotic treated arms were compared. In depth analysis of the microbiome compositions, RVV-responders and individuals with high rotavirus shedding regardless of vaccination arm, suggested that specific bacterial taxa depletion rather than microbiota depletion may have a greater positive impact on RVV immunogenecity. It should be noted that trial participants were adults, who have preexisting rotavirus immunity. Thus results obtained in this study could be different if tested in naïve infants.