A novel function of the antihelminthic drug Praziquantel: new strategy for combatting schistosomiasis 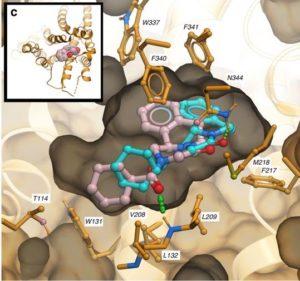 Docking poses of R-PZQ (light red) and S-PZQ (light blue) in the human 5HT2BR. Both isomers of PZQ dock favorably within the orthosteric pocket of the 5HT2BR crystal structure (Protein Databank Code: 5TVN). The R-isomer shows a better predicted binding score by 0.6 kcal/mole partially due to a more favorable hydrogen bond with the backbone NH group of L209. Source: Chan et al., 2017

Interesting work by Chan and colleagues describes an unknown mechanism of action of the tetracyclic tetrahydroisoquinoline praziquantel (PZQ), the drug widely used to combat schistosomiasis, a debilitating and common tropical disease which affects more than 260 million people worldwide.

Schistosomiasis is caused by the blood-vessel dwelling trematodes belonging to the family schistosomatidae (blood fluke). This vascular parasitic infection is considered as a neglected tropical disease (NTD). It is the second most common tropical diseases after malaria, causing an estimated annual loss of 70 million Disability-adjusted life years (DALYs). The debilitating impact of schistosomiasis is initiated by the host’s immune response to schistosome eggs in the liver, intestine and/or bladder and genital tract where they induce granuloma inflammation, periportal fibrosis, hypertension causing clinical disease morbidity and mortality. There is no vaccine available for the treatment of schistosomiasis. The standard treatment is with the anthelmintic drug, PZQ. PZQ has been shown to cause rapid paralysis of schistosome musculature and subsequent tegumental damage that promotes immunological clearance of worms from the host. In line with these observations, many studies have described a selective effect on calcium channels of trematodes and an increase permeability of calcium. However, the drug PZQ has its limitations and the molecular targets of the drug remain undefined. High rates of re-infection and development of resistance have been observed in the field. Furthermore, PZQ targets the adult worms and does not affect any of the migrating larval stages. These drawbacks urge the characterization of the targets of the drug and the development of effective vaccine(s).

In this study, Chan et al., identify praziquantel as a ligand for the human serotoninergic 5-HT2B G-protein-coupled receptor. Using multiple murine and human experimental model approaches, they characterize the enantiomer (R) of PZQ as a G protein-coupled partial agonist ligand acting at 5HT(2B) receptors serving to both modulate host vascular tone, thus promoting clearance of the parasite to the liver and to modulate parasite contractility. This work is reinforced by recent study from a multi-institutional collaboration in the USA suggesting that PZQ acts at serotonergic receptors in both the human and the parasite vasculature. Thus, the clinical efficacy of PZQ resides in the activity at both parasite and host receptors, both targets potentially being G protein-coupled receptors. This activity causes contraction of both the parasite and host mesenteric vessels to increase perfusion pressure and flush paralyzed worms to the liver where they can be cleared up from the host.

These data reveal a function for praziquantel as a regulator of vascular tone in treated hosts and support a strategy for developing novel anthelmintics with more efficacious activity.