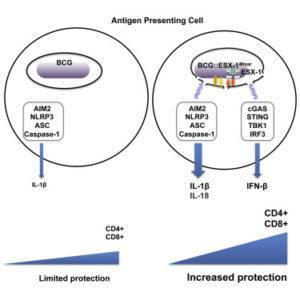 For the following weeks, Immunopaedia will be showcasing highlights from the 5th Global forum on TB vaccines that took place in New Dehli, India between the 20-22nd February, 2018.

Dr Matthias I. Gröschel presented data at a plenary session of the 5th Global Forum on TB vaccines conference, on the development of a recombinant Mycobacterium bovis, Bacille Calmette-Guerin (BCG) strain. M.bovis BCG was used as the mycobacterial strain for the development of a vaccine against tuberculosis (TB) in 1921. Almost 100 years on, the vaccine has questionable efficacy on protection against the development of TB in adults. However, studies have shown that it confers protection of infants and against disseminated forms of TB disease.

Compared with Mycobacterium tuberculosis (M.tb), BCG lacks expression of the type VII secretion (T7S) Esx-1/ESAT-6 secretion system. This system and the proteins associated with it, is used by the mycobacteria to export proteins that play a role in host-pathogen interactions. It is suggested that key differences in the protein composition between M.tb and BCG, particularly the absence of the EsX-1 pathway could explain the reduced efficacy of BCG to prevent TB.

To combat this, the research group created two recombinant strains of BCG with the insertion of the Esx-1 pathway from either M.tb or Mycobacterium marinun. Gröschel et al. showed that addition of the Esx-1 pathway from M.tb unlike M. marinum resulted in generation of virulent BCG. Additionally, he showed that the both recombinant BCG-Esx1 (from either M. marinum or M.tb) were able escape the macrophage phagosome like M.tb, a property absent in the BCG vaccine strain. Both BCG-Esx1 strains were able to induce immune responses more similar to M.tb such as induction of IL-1β and IFN-β by THP-1 human macrophages. BCG is known to poorly induce CD8 T cell responses, where as M.tb can induce CD8 T cells responses. Gröschel et al. demonstrated that BCG-Esx-1 strains were capable of inducing robust functional CD8 T cells that were able to produce IFN-γ and TNF-α. Finally,  they also showed that these strains were able to confer modest superior “protection” from M.tb burden compared to the BCG strain, and was associated with less pathology.