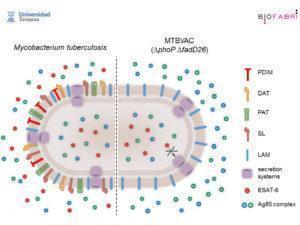 The only licensed vaccine against Tuberculosis (TB) is Bacille Calmette Guerin (BCG), a live attenuated Mycobacterium bovis strain that was developed in 1921. BCG is given as routine vaccination in many regions of the world where the burden of TB is high. However, recent studies have shown that BCG is most efficacious in childhood, where it protects primarily from disseminated forms of TB, such as TB meningitis. In adults the efficacy of BCG against TB is variable. Thus development of new TB vaccines that are able to protect against Mycobacterium tuberculosis (M.tb) infection and/or TB disease in adolescents and adults, is one of the major priorities to combat the TB epidemic.

Infection with M.tb, the etiological agent of TB, does not always result in TB disease. In fact, some studies have shown than prior infection with M.tb can protect you from developing TB. This and failure of peptide based vaccines such as MVA85A to confer superior protection compared to BCG. Suggest that harnessing the “protective immunity” induced by live  M.tb infection could be a potential vaccine candidate.

Carlos Martin presented his research on the development of MTBVAC vaccine, a live attenuated M.tb strain from lineage 4 (Euro-African-American) at the 5th Global Forum on TB vaccines. Attenuation of the M.tb strain used in MTBVAC candidate vaccine, is facilitated by two major delections. (1) PhoP, a major M.tb transcription factor that controls approximately 2% of M.tb genomic expression including expression of cell wall lipids and antigen secretion systems, such as the one responsible for the export of ESAT-6 out of M.tb. (2) fad26, gene required for phtioceroldimycocerosates (PDIM) synthesis, a major M.tb virulence factor.

MTBVAC, was developed under the hypothesis, that a live attenuated M.tb strain is able to induce M.tb-specific immunity that may confer improved efficacy relative to BCG, as it maintains the genome of M.tb with the exception of the 2 deletions. MTBVAC expresses immunodominant antigens absent in BCG but present in M.tb such as Ag85, CFP-10 and ESAT-6. In mouse models, MTBVAC has been shown to be safe and immunogenic, and induce superior protection compared to BCG in C3H mice.

Currently, MTBVAC is being tested in two phase 2 trials in neonates and adults. Results from these trials are expected late 2017/early 2018.