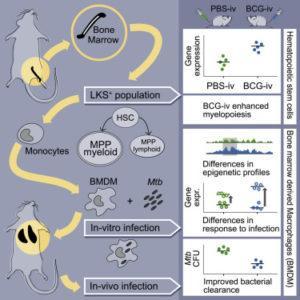 Dr Maziar Divangahi highlighted one of his research groups recent publications (Kaufmann et al.,) which aimed to determine if BCG vaccination can induce “long term” immunity against Mycobacterium tuberculosis (M.tb) infection that is mediated by hematopoietic stem cells (HSCs). Current vaccine strategies against Tuberculosis (TB) aim at inducing T cell mediated protective immunity. This is due to studies showing the importance of CD4 T cells in the control of TB, as well as the capacity of T cells to induce long term immunity, characteristic of their adaptive immune function.

Although studies have shown the importance of innate immunity, particularly macrophages in the control of M.tb infection. Innate immunity has not been considered as a potential target of vaccine induced immunity. However, recent studies have shown the ability of innate immune cells to mediate enhanced resistance upon reinfection of the same or unrelated pathogen. This is phenomena known as trained immunity, has been attributed to epigenetic modification of gene expression in mononuclear phagocytes.

HSCs unlike monocytes/macrophages are self-renewing, long-lived and have the ability to differentiate to any cell in the blood system, including monocytes/macrophages. Thus induction of “trained” HSCs could potentially result in long lived trained monocytes/macrophages. Kaufmann et al., demonstrated that intravenous (iv) but not subcutaneous (sc) BCG vaccination was associated with expansion of HSCs lineage-c-Kit+Sca-1+ (LKS) cells and multipotent progenitors (MPPs, LKS+CD150-CD48+) cells. Increased expansion of HSCs in BCG-iv vaccinated mice, compared to sc vaccination could be due to the induction of systemic dissemination of BCG to the bone marrow, which does not occur after sc vaccination. They also showed that BCG-iv vaccination specifically induced transcriptomic changes in HSCs  and MPPS which promoted the polarisation and differentiation towards increased proportions of myeloid lineage cells. They also demonstrated that bone-marrow derived macrophages (BMDMs) from BCG-iv vaccinated mice demonstrated significantly induced protection against M.tb challenge compared to BCG-sc vaccinated mice. This function was dependent on IFN-γ signalling and epigenetic modification of genes. Finally, they also demonstrated that HSC reprogramming resulting in ability to “protect” against M.tb infection was sustained in the absence of persistent exposure to BCG.