5GFTB Highlights: Can we immunologically distinguish LTBI, EPTB and PTB 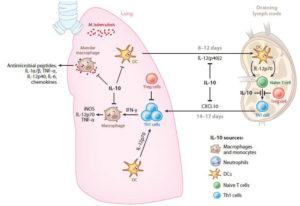 The need for new Tuberculosis (TB)  diagnostic tools was highlighted as one of the major improvements required to combat the TB epidemic. One of the major challenges of this epidemic is the lack of non-microbial TB diagnostic tools to distinguish between asymptomatic M.tb infection (LTBI) and TB, pulmonary TB (PTB) the major form of the disease, as well as the difficulty to diagnose extra-pulmonary TB (EPTB).

Srabanti Rakshit, PhD candidate from the Indian Institute of Science, presented her work which aimed to determine unique T cell features that can distinguish LTBI, PTB and EPTB (Rakshit et al.). M.tb-specific CD4 T cell functional profiles were characterized in response to antigen stimulation with either M.tb DosR regulon encoded latency antigens, which have been shown to be preferentially recognised by individuals with LTBI but not PTB, and immunodominant secretory antigens, ESAT-6, CFP10, TB10.4 and Ag85.

In summary, this data presented by Srabanti Rakshit illustrated the potential use of DosR regulon antigen, Rv1737 in a diagnostic antigen stimulation assay to distinguish LTBI, EPTB and PTB.