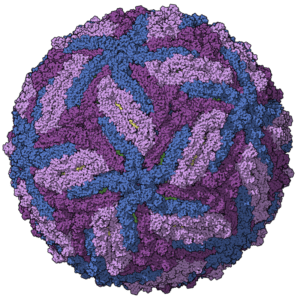 The recent Zika virus (ZIKV) outbreak has highlighted the need for developing ZIKV therapies and vaccines. One of the biggest risks of ZIKV infection in pregnant women is the child suffering from adverse effects including microcephaly. This study found that ZIKV infection of non-human primates through vaginal transmission resulted in viral replication in the female genital tract. The study suggests that fetal infection may be enhanced by vaginal transmission.

Zika virus (ZIKV) was first isolated in 1947 in Uganda and has since spread to various parts of the globe. ZIKV , a member of the Flaviviruses, is a positive-sense RNA virus. Although it usually presents with mild symptoms in adults, ZIKV has been associated with numerous adverse effects for children born to mothers infected with the virus. For example, ZIKV has been associated with microcephaly, lissencephaly and ocular lesions in these infants.

ZIKV is predominantly transmitted through mosquito bites but sexual transmission of the virus has been documented. Infectious virus has been isolated in semen for up to 24 days after symptoms appear and ZIKV RNA can be detected in semen for up to 6 months after symptom onset. Sexual transmission has even been documented from an asymptomatic individual to another.

This made researchers, led by Christopher Miller, to further understand the role of sexual transmission in ZIKV infection and replication. To do this, the researchers used rhesus monkeys. The authors either vaginally or subcutaneously infected the monkeys with ZIKV. They monitored the replication of the virus in both the reproductive tract and blood plasma.

Interestingly, some monkeys did not get infected even after 8 viral inoculations and were given Depoprovera (a commonly used contraceptive drug) which made them susceptible to infection. This suggests that this contraceptive may increase the risk of getting infected with ZIKV.

These data provide evidence that ZIKV can replicate efficiently in the female genital tract.  The authors further hypothesize that pregnant women who obtain the virus through sexual transmission may more easier transmit it to the fetus. This study also has implications in ZIKV vaccine development as a vaccine which protects against mosquito-bite transmission may not protect from sexual transmission.