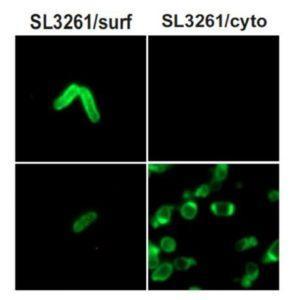 Attenuated bacterial vaccines are able to induce protective immunity against diseases. There has been interest in using Recombinant attenuated Salmonella  vaccines (RASV) as bacterial vectors for a range of microbial antigens. However, poor immunogenicity of some RASVs has questioned their utility as bacterial vectors for vaccine design. Current data suggests a role of antigen localisation within the RASV in induction of vaccine mediated immunity. However, this potential effect of antigen localisation in different RASV systems has not been illustrated.

Sevastsyanovich et al. developed three RASV systems, where the type 5 autotransporter plasmid encoded toxin-ESAT-6 protein chimeras enabled localisation and accumulation of ESAT-6, vaccine antigen, in either the cytoplasm (RASV-ESAT6-cyto), cell surface (RASV-ESAT6-surf) or secreted (RASV-ESAT6-sec) out of the vector. These RASV-ESAT6 systems enabled them to perform a head to head comparison of the impact of antigen localisation on magnitude and characteristics of vaccine induced immunity in a C57BL/6 mouse model.

Immunization with RASV-ESAT6-surf and RASV-ESAT6-sec induced a high proportion of CD4+ ESAT-6 specific cells that were functional producing IFN-g and IL-2 Th1 cytokines in vaccinated mice. Sevastsyanovich et al.  demonstrated that RASV-ESAT6-cyto poorly induced endogenous ESAT-6-specific CD4+ T cells. Illustrating that antigen localisation does have impact on induction of vaccine mediated immunity, suggesting that poor immunogenicity of some RASVs could be due to antigen accumulation in the cytoplasm instead of the cell surface or secretion.