Using chemokine CXCL13 as a biomarker of germinal centre activity 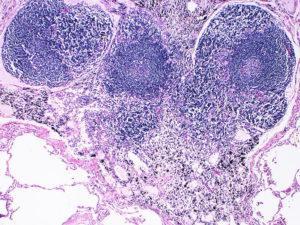 Germinal centres are sites in lymph nodes where antigen-specific B cells mature, gaining further affinity to the antigen they are targeting.  Affinity maturation is required for antibodies against HIV to gain breadth and effective antibodies to influenza also have high mutation levels.

Currently, most researchers analyze antibodies in serum to determine vaccine-generated antibody responses. However, this method of analysis is limiting as neutralizing antibody titres are measured after a long time period after the initial immunization. This is because measurable responses can only be obtained after a series of vaccine boosts.

Analyzing early immune responses may be important in understanding the immune response to a vaccine and improve on current vaccination protocols. Therefore, researchers, led by Shane Crotty, looked at chemokines to see whether they could be used as markers for germinal centre activity.

The researchers took plasma samples from HIV-infected individuals and found that CXCL13 levels were associated with the development of broadly neutralizing antibody responses. The scientists observed an association between plasma CXCL13 and germinal centre T follicular helper cells in humans which further suggests that this chemokine could be used as a biomarker.

Looking at a mouse model, the plasma CXCL13 was strongly associated with germinal centre activity in mice after immunization with ovalbumin in aluminium hydroxide adjuvant. Plasma CXCL13 levels also increased after infection with LCMV and vaccinia viruses. The same association between CXCL13 and germinal centre activity was also observed in macaques after protein immunization and in humans after influenza, yellow fever and trial HIV vaccination.