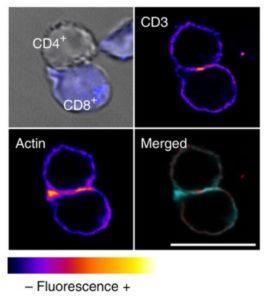 CD8 T cells mediate defences against intracellular microbes and cancer via the recognition of antigen on major histocompatibility complex I (MHC-I), a molecule expressed by all almost cell types. However, professional antigen presenting cells (APCs) such as Dendritic cells (DCs), macrophages and B cells are responsible for priming functional CD8 T cells.

CD4 T cells are well known as T helper cells and potentially necessary for the generation of functional memory CD8+ T cells, however the exact mechanism of this is unknown.CD4 T cells undergo transphagocytosis, a process by which CD4 T cells capture bacteria from DCs. Transphagocytic CD4 T cells (tpCD4) have the ability to kill internalised bacteria, and it is suggested that this mechanism could be used to present antigen to other cells via MHC-I. Cruz-Adalia et al. aimed to determine if tpCD4 T cells are true APCs and have the ability to prime functional memory CD8+ T cells.