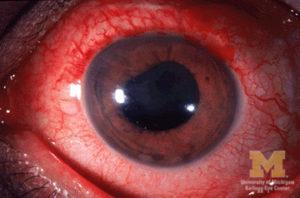 Immune-mediated inflammation of the uvea is one of the major causes of uveitis. Recent studies have linked intestinal microbiomes and their metabolites to the pathogenesis of various immune-mediated diseases. For example, Short Chain Fatty acid (SCFAs), metabolites produced by Firmicutes bacteria during dietary fibre fermentation are known to play a protective role in various immune-mediated diseases through expansion of regulatory T cells (Tregs) or by maintaining the integrity of the intestinal epithelial barrier. In this article, the researchers used inducible experimental autoimmune uveitis (EUA), a T-cell-mediated autoimmune disease model induced by immunization with uveitogenic retinal antigens or by a passively transferring T cells against retinal antigens to investigate the effect of exogenously administered SCFAs (especially sodium propionate) on uveitis. They showed that administration of propionate reduces the severity of EUA in mice by increasing the number of Tregs and reducing the number of Th17 and Th1 helper cells in intestine. This was achieved by abrogating the changes in intestinal morphology and gene expression caused by immunization and by suppressing the traffic of effector T-cells to the spleen of EUA mice.

The researchers administered sodium propionate, sodium butyrate or sodium acetate to C57Bl/6J or B10.RIII EAU mice 21 days before immunization. They discovered that C57Bl/6J EAU treated mice developed less severe uveitis compared to the control after 3 weeks of immunization, while the severity of B10.RIII EAU treated mice was unchanged. Secondly, to understand the mechanism by which oral SCFAs was able to alleviate the severity of uveitis, the researchers checked the number of Tregs, Th1 and Th17 cells in intra- and extra-intestinal lymphoid tissues. They found that there were higher numbers of Tregs in intestinal lymphoid tissues compared to the control. In contrast, there were lower numbers of Th1 and Th17 cells in intestinal lymphoid tissues of B10.RIII EAU mice.

The researchers also checked the expression of genes known to be involved in host protection in the ileum such as Trefoil factor 3 (TFF3), other anti-microbial peptides (AMPs), and cytokine production. At 1 week post-immunization they found a significant decrease in TFF3 expression. While the expression of AMPs was higher compared with controls. On the other hand, they found decreases in inflammatory cytokines, such as IFNγ, IL-10, and IL-17, in the ileum 1 week post-immunization most likely due to migration of cytokine producing cells away from the gut.

Finally, to study migration of leukocytes from the intestine to the eye, they used Kaede transgenic mice (mice engineered to express a photo-convertible protein called Kaede in all cell types). They found an increase in leukocyte migration from intestine to the eye of EUA mice compared to non-immunized mice. This migration correlates to the severity of uveitis. They also found increases in the helper T cells (Th1 and Th17) migration from colon to spleen, however, upon administration of propionate in EUA mice there was decrease of this migration.

In conclusion, their findings show that orally administered SCFAs could be of therapeutic use in treating uveitis by maintaining subclinical intestinal morphology and by preventing trafficking of leukocytes between the gastrointestinal tract and extra-intestinal tissue.