Severity of leishmania infection depends on time of day 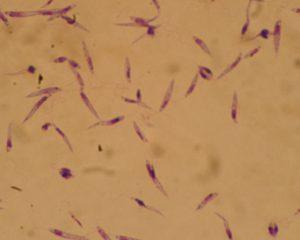 The Leishmania parasite mostly invades neutrophils and macrophages to establish infection. These innate immune cells have internal circadian clocks which influences how they function. Researchers have now shown that the host circadian clock influences the severity of Leishmania infection. This may provide knowledge on the best time of the day to introduce therapeutics and prophylactics against the parasite.

Since the intracellular Leishmania parasite infects both macrophages and neutrophils, researchers investigated whether the time of day of an infection would influence the severity of infection. The researchers hypothesized that the infectivity of the parasite would present a circadian rhythm.

The team infected mice with the Leishmania parasite at varying times of the day and observed when the worst Leishmania-related symptoms emerged. The severity of infection varied over 24 hours. The parasite infected cells more effectively in the early evening. This was also the time when the immune response targeting the parasite was at it strongest. The researchers suggest that this is because when the immune system is at its strongest, there are more immune cells available for the parasite to infect.

Altogether, this is the first study to show the influence of the circadian clock on infection by the Leishmania parasite in mammals. Understanding parasite-host interactions may aid in improved prevention and treatment strategies against the parasite.