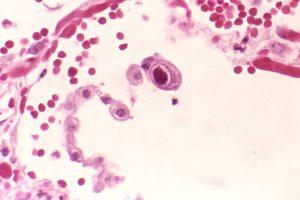 Cytomegalovirus (CMV) infection usually results in lifelong, chronic infection. The virus remains in a latent state that eventually gets reactivated. Activation induces T cell responses to subdue the virus, however, it was unknown what role the immune system plays in latent CMV infection. Researchers, led by David A. Hildeman, found that latent infection was accompanied by an increase in the frequency of regulatory T cells (Tregs). The absence of Tregs led to reactivation of CMV in specific tissue. These data show that Tregs are important in maintaining the virus in a latent state in some tissues and manipulating this T cell subset in a therapy may aid in controlling established infection.

Primary infection with CMV triggers a natural killer response and subsequently a cellular response, dominated by CD4+ and CD8+ T cells. This responses is not strong enough to completely eliminate the virus from the body and instead the virus becomes latent.

The virus maintains this latent state in tissues such as the spleen, lungs and the bone marrow. The virus hides in monocytes, macrophages and CD34+ hematopoietic cells. The latent virus can become reactivated especially in people with immunodeficiency such as HIV-infected individuals and the elderly.

The immune response which maintains latency was not well understood. and therefore, the researchers investigated this further. They focused particularly on Tregs. To do this, they used a latent CMV mouse model.

After 8 months of infection, the team found that the frequency of Tregs increased with latent CMV infection. They found that Tregs play an important role in the maintenance of latency. The role of Tregs, however, was tissue-specific. In the spleen, Tregs suppressed CMV-specific T cell effector functions while in salivary glands, Tregs prevented reactivation of CMV.  Depletion of Tregs led to increased numbers of CD4+ and CD8+ T cells.