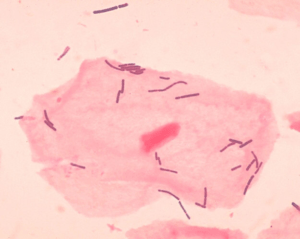 Oral tolerance is important in ensuring that the body does not mount an immune response against everyday foods we ingest. CD4+CD8αα+ double-positive intraepithelial lymphocytes (DP IELs) are cells which play a regulatory role in the intestine. Researchers from the Washington University School of Medicine have now found that the probiotic Lactobacillus reuteri induces DP IELs. This study further highlights the importance of the microbiome on immune responses and regulation.

DP IELs are a distinct subset of lymphocytes.  Their main role in the intestine is to regulate the immune response, aiding in oral tolerance. These cells arise from lamina propria CD4+ T cells. Once they reach the epithelium, their CD8+ lineage program is re-activated by up-regulating Runx3 and T-bet and down-regulating Thpok. TGF-β, retinoic acid, IL-27 and IFN-γ also contribute to this re-activation.  As previous studies have found that germ-free mice lack DP IELS, researchers believed that the microbiome plays a role in the development of these lymphocytes. This made the team, led by Marco Colonna, investigate which bacteria were involved in the development of DP IELs.

They used mouse models with and without DP IELs; C57BL/6 mice from Charles River Laboratories (CR) have DP IELs but not Jackson laboratories (JAX) C57BL/6 mice. The researchers found that the cells could be transferred to JAX mice through ileal or faecal microbiota from the CR mice. When the CR mice were treated with certain antibiotics, the development of DP IELs was reduced. The team narrowed down the bacteria responsible for the development of DP IELs to Lactobacillus reuteri.

The team then went further to understand the mechanisms behind this. They found that Lactobacillus reuteri  metabolize tryptophan to indole derivatives which activate aryl-hydrocarbon receptor (AhR). This led to the down-regulation of Thpok and subsequently the induction of DP IELs. Providing mice with a high tryptophan diet increased the frequency of DP IELs in mice which already had them but was unable to induce DP IELs in germ-free mice who were monocolonized with  Lactobacillus reuteri. This suggests that other factors and other bacteria may also be contributing to the development of these cells.