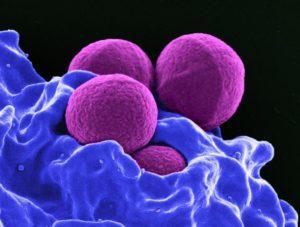 People who suffer from atopic dermatitis, also known as eczema, experience dry, itchy patches on their skin when they come into contact with allergens. Scientists from the University of California have discovered bacterial species that can be added to a lotion formulation and effectively treat the condition.

S.aureus is part of the commensal bacteria found on the skin. However, there is an overgrowth of this bacteria in individuals who have eczema. The increased presence of the bacteria has been found to increase the severity of the condition. The mechanism behind this is unclear but could be due to the inflammatory response caused by the bacteria, leading to an allergic reaction.

The researchers, led by Richard Gallo, investigated whether bacteria found on human skin could aid in the killing of S.aureus. To do this, they recruited individuals with and without eczema and took swabs from their forearms. They tested bacterial samples from the participants in a high-throughput screen and analyzed how well the isolates were able to kill S.aureus.

They found that subjects without eczema commonly had species with antimicrobial activity against S.aureus whilst individuals with eczema rarely had any protective species. Interestingly, a few of the strains correlated with increased S.aureus on the skin.

The main species responsible for killing S.aureus were S.epidermidis and S.hominis. These bacteria produced antimicrobial peptides which selectively killed S.aureus. The bacteria were potent at low doses and worked together with the human microbial peptide known as LL-37.

The researchers also performed mouse studies which confirmed the activity of the bacteria with antimicrobial activity against S.aureus. In human studies, adding the protective bacterial species in a lotion formulation and giving this to the participants with eczema reduced the amount of S.aureus on their skin. In two participants, the S.aureus was completely eliminated.

Altogether, these data show that bacteria able to kill other bacteria can be harnessed in treatment. In this study, probiotics have been shown to be effective in the treatment of eczema.