Polyfunctional antibodies in the control of HIV 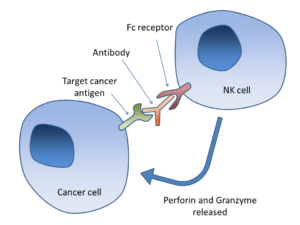 Elite controllers (ECs) are a group of HIV-infected individuals who are able to suppress viral replication and live for many years without needing antiretroviral therapy to control their viraemia. Researchers from have found that ECs have antibodies with polyfunctional activity which are able to recruit a wide range of innate immune cells to kill the virus. This study provides further insights into the role of antibody functions in HIV replication control.

Although most antibody-based research on HIV focuses on neutralizing antibodies, antibodies have other functions that are governed by the Fc portion of the protein. These functions include antibody-dependent cellular cytotoxicity (ADCC).  ECs have been found to exhibit high and effective levels of ADCC.

The researchers found that ECs produced antibodies that were able to recruit a wide range of innate cells such as phagocytes and natural killer cells, thereby inducing a potent anti-viral response. These antibodies were also able to recruit complement to aid in the potency of their response against HIV.

The main drivers of this antibody response were IgG1 and IgG3 subclasses. In the viremic group, individuals mostly had responses against HIV which were being driven by IgG2 and IgG4. These data fit well with the results from the HIV RV144 vaccine trial. This trial found that polyfunctional responses driven by IgG3 positively correlated with reduced risk of infection.

Altogether, these data reveal that there are differences in the antibody responses between people who can control HIV replication naturally and those who cannot. Although antibody neutralization may not be implicated in HIV control in natural infection, other antibody functions have clearly been shown to play a role.