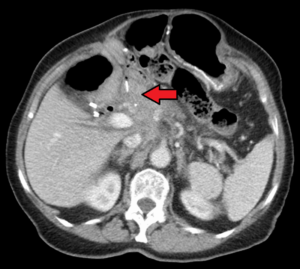 Nab-paclitaxel  is a therapeutic nanoparticle used in the treatment of pancreatic cancer. Researchers from the New York University School of Medicine have found that this drug increases activation of macrophages in pancreatic cancer, increasing the anti-tumour immune response.

The main mechanism of action of paclitaxel was established previously. It acts by stabilizing microtubules which in turn prevents the division of tumor cells. When paclitaxel enters macrophages it induces cell polarization in a mechanism dependent on Toll-like receptor 4. The researchers, led by Dafna Bar-Sagi, therefore aimed to determine whether the modified drug nab-paclitaxel had any effect on macrophage polarization.

First, the scientists incubated a macrophage cell line with nab-paclitaxel and found that the drug was internalized by macrophages through the process of macropinocytosis. Macropinocytosis involves the endocytosis of non-selective fluid-phase molecules. This helps in antigen sampling and scavenging. Nanoparticles have previously been found to be taken up through this process.

The researchers then went on to discover that the in vitro macropinocytosis of the nanoparticle led to the activation of the macrophages. This process was dependent on Toll-like receptor 4 as shown in previously studies on paclitaxel.  To validate these findings in vivo the researchers used mouse models of pancreatic cancer. They found that the drug was able to activate pancreatic tumor-associated macrophages.

Altogether, this study highlights a novel mechanism used by nab-paclitaxel to help fight pancreatic cancer. This drug may be useful, in combination with immunotherapies, to help increase the anti-tumour response in pancreatic cancer patients.