Not all CD8 T cells have cytotoxic effects 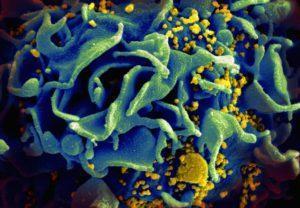 It has been known for a long time that CD8 T cells are important for the control of the HIV in infected individuals. However, the CD8 T cell activity towards the virus is not always the classical cytotoxic CD8 response which kills the virus-infected cells. It has been found that CD8 T cell activity does not involve the killing of the infected cells. This is known as the CD8 cell noncytotoxic anti-HIV response (CNAR).

In a review article by researcher Jay Levy, he describes how CNAR was first discovered and how it has led to the identification of novel anti-HIV proteins.

CNAR was first identified in long-term survivors – HIV-infected people who remained healthy with low viral loads and high CD4 counts for many years without antiretroviral drugs. When PBMCs were isolated from these patients, it was found that their HIV-infected CD4 cells only released virions after the removal of CD8 T cells which suggests that the CD8 T cells were somehow inhibiting this process.

Once the CD8 T cells were added back, virus replication was inhibited but the CD4 T cells remained unaffected. The CD8 cell antiviral factor (CAF), a soluble protease-sensitive factor was found to be driving this effect. The protein is unique to CD8 T cells and is able to block transcription of the virus. The protein has also been implicated in the prevention of HIV infection as it has been found in individuals who are at a high risk of acquiring HIV but remain HIV-negative.

The structural properties of CAF have proven hard to investigate because it is present at very low concentrations. One research group identified a protein they believed to be CAF. The team suggested that a nuclear protein known as TOE1 could be CAF because this protein has an effect on HIV transcription and inhibits viral replication. However, the data was not conclusive and further information suggests that although TOE1 is an antiviral protein, it is not CAF. Therefore, more studies must be done to identify the structure of CAF.

The identification of CNAR has led to the discovery of anti-viral proteins with the potential to be used as HIV therapies. CAF is a protein with great potential in HIV therapy and prevention. It has strong antiviral activity and therefore learning more about its structure and function is important. The identification of TOE1 as another antiviral protein is also of importance as it can only be beneficial to identify and study as many proteins as possible which are able to fight HIV.

Journal Article: Levy 2015. Discovery of another anti-HIV protein in the search for the CD8+ cell anti-HIV Factor. PNAS