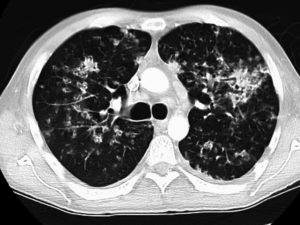 TB/HIV co-infection is a major health concern, especially in sub-Saharan Africa where approximately 1.2 million cases were recorded in 2014 according to the World Health Organization. In this study, researchers used SIV-infected macaques to gain insight into the immune response towards HIV/TB co-infection. They found that other immune cells and proteins other than the suspected CD4 T cells were responsible for immunity against active TB.

When infected with the Mycobacterium tuberculosis (Mtb), an individual may either develop latent or active TB. Individuals with latent TB do not develop any TB -related symptoms and do not transmit the bacteria to others. The opposite is the case for active TB. People who have HIV and are exposed to TB are 20 times more likely to develop active TB than HIV-negative individuals.

Since HIV infects CD4 T cells, it was thought that the depletion of these cells was the cause of increased susceptibility to TB infection and the development of active TB. However, the exact mechanisms behind this was unknown and this led researchers, led by Deepak Kaushal from the Tulane National Primate Research Center, to investigate this further.

The researchers exposed SIV-infected macaques to a low dose of Mtb and monitored them over several weeks. They used a low-dose to increase the chances of the macaques being latently infected rather than developing active TB, however, some of the primates did develop active TB.

All the co-infected macaques suffered from a significant decrease in CD4 T cells in the lung but there were some macaques who were able to control this effect and did not develop active TB. The macaques were classified as latently infected if they had positive results for both the tuberculin skin test (TST) and PRIMAGAM but did not display any signs of disease.

The researchers found that CD8 memory T cells, increased granzyme B production and B cells in the pulmonary tissue were driving this immunity and led to the maintenance of latency in these macaques.

These findings show that the shift from latent TB to active TB in SIV-infected macaques may not be dependent on CD4 T cells as previously believed.  This study was conducted in non-human primates and therefore more research needs to be conducted in humans to determine whether the same is true. Importantly, this study highlights the need for TB vaccine efforts to also focus on eliciting CD8 and B cell responses as this may increase efficacy levels.