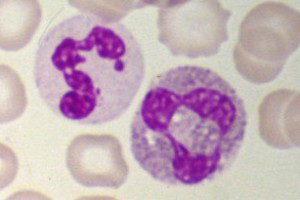 Immune tolerance is important during pregnancy to allow for the development of the fetus without a maternal immune response being triggered against it. Other immune factors have been implicated in the maintenance of immune tolerance in pregnancy but this study highlights the previously unknown role for neutrophils in maternal tolerance.

The role of regulatory T cells (Tregs) in the maintenance of tolerance during pregnancy has been known for a long time. Fetal Tregs have also been shown to remain in the mother after birth and expand during subsequent pregnancies. Other processes that dampens the immune response in pregnant women include the presence of indoleamine 2,3-dioxygenase as well as PDL1. Disruption of any of these immune tolerance mechanisms may lead to pregnancy complications such as miscarriage.

Neutrophils have long been considered to be short-lived innate cells. However, studies are now showing that neutrophils may aid in the adaptive immune response. In terms of pregnancy, studies have shown that neutrophils are present in the decidua – the membrane lining the uterus during pregnancy – but no evidence has been shown for any effect the neutrophils may have on the outcome of the pregnancy.

Scientists from Queen Mary University of London investigated the role neutrophils could be playing in immune tolerance. They found that neutrophils aid in the development of adaptive tolerance of the maternal immune system during pregnancy.

The researchers first tested whether neutrophils had any effect on T cell responses when exposed to pregnancy hormones. They found that in these conditions, the neutrophils induced T cells which had regulatory phenotypes and had proangiogenic activity.

Using mouse models, the researchers found that depleting neutrophils in pregnant mice led to an impairment in both embryo and placenta development. The mechanism of this was through a protein expressed by the neutrophils called FOXO1. Neutrophils deficient in this protein were unable to induce a regulatory response and could not restore developmental defects in the embryo or placenta.

Altogether, this study highlights a novel role for neutrophils in the maintenance of tolerance in pregnancy.  This study sheds further light into the relationship and cross-over between the innate and adaptive immune systems.