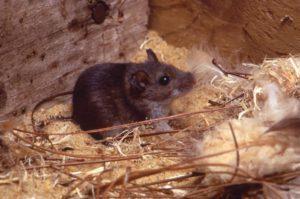 Upon activation, myeloid differentiation primary response gene 88 (MyD88) causes a signalling cascade involving Toll-like receptors (TLRs) and IL-1 receptor. Its signalling has been found in a number of cell types of the intestine, but was not previously implicated in C. rodentium infection.

Researchers developed a knock-in mouse model to evaluate cell-specific expression of MyD88. This allowed researchers to determine which cell types are essential for response and protection against C. rodentium infection. Cre-recombinase CD11c and LysM models were investigated, where functional signalling of MyD88 was only found in CD11c+ models. CD11c+ mice orally infected with C. rodentium had a high survival rate immediately after infection, which later decreased as the infection progressed, suggesting that CD11c+ mice were protected against C. rodentium infection most effectively at the early stages.

In MyD-OFF mice, typical inflammatory responses were absent. Colonic tissue was consequently damaged and underwent crypt hyperplasia, as well as damage to the mucosa. There was very little secretion of interleukins, including IL-17A, IL-22, and IFN-γ. However, when MyD88 function was restored (in MyD-ON mice), there was a significant reactivation of the T cell response, where there was a marked increased in the innate lymphoid cell 3 (ILC3) that were responsible for secreting the interleukins and no gangrenous mucosal damage. This model isolated the functionality of MyD88 and indicated that MyD88 signalling triggered the activation of specific cells, particularly dendritic cells and intestinal epithelial cells. This is logical since C. rodentium infection is followed by a strong T cell response and is associated with interfering with intestinal barriers. Interestingly, restoring MyD88 function at only ILC3 and T cells was not sufficient to for immune induction against C. rodentium. Yet, restoring MyD88 function at intestinal epithelial cells indicated host resistance, increased barrier function, and reduced hepatic bacterial load.

In conclusion, researchers were able to illuminate MyD88 function and its role in the larger, cooperative host response against C. rodentium.