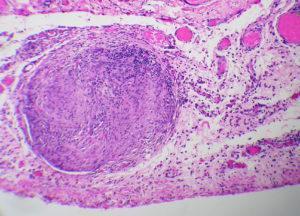 Tuberculosis is caused by a bacterium known as Mycobacterium tuberculosis (M.tb).  The presence of drug-resistant strains of the bacteria highlights the fact that the bacteria can easily mutate. An understanding of what selective pressures contribute to this mutation rate is important. In this study, researchers found that infected M.tb-individuals have different amounts of genetically diverse M.tb which may be linked to the severity of their TB disease. The research highlights the factors which are targets of selective pressure and how they influence M.tb diversity.

Like other pathogens such as viruses, bacteria are able to mutate at a fast rate. This is evidenced by the emergence of TB drug-resistant M.tb. The bacteria is able to mutate despite the fact that is has very limited genetic diversity. Previous studies in the TB field have found factors that affect the genetic diversity of the bacteria. There are also studies which look at the evolution of the bacteria whilst inside the host. However, all these studies did not completely answer the question of how diverse the genetic makeup of the bacteria is and what factors affect it.

Therefore, researchers led by Caitlin Pepperell, investigated how M.tb varies. They did this by using genetic information from participants infected with M.tb. The researchers gathered information from three studies which were previously published. They found that patients with M.tb infection had a large amount of bacteria in their systems, some having billions of M.tb in their bodies.

The evolution of the bacteria was widely driven by environmental selection pressure within the hosts. The M.tb variation was associated with the clinical severity of the disease but did not correlate with treatment, presence of drug-resistant bacteria or the lineage of the bacteria. The biggest changes in the M.tb genome were in genes involved in the regulation, synthesis and transportation of lipids and glycolipids.

This comprehensive study reveals that M.tb is a diverse bacteria and different factors can influence its genetic diversity in the host. Understanding such pathogen-host interactions may give insight into possible treatments for the disease and may aid in preventing the emergence of drug-resistant strains.