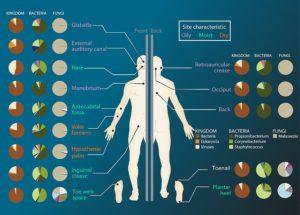 Commensal microbiota found in humans has been found to impact various autoimmune diseases by a link to T cell development. The mechanisms behind this were not well understood. Researchers at the University of Utah School of Medicine, have now found that human microbiota aid in the survival of  T cells by suppressing a secreted apoptotic factor known as Erdr1.

Antigen-specific T cells are required to fight infectious diseases, however, T cell apoptosis must also take place to reduce inflammation. The dysregulation of T cell apoptosis may lead to autoimmunity and therefore modulating this phenomenon could have therapeutic implications. The researchers, therefore, studied the impact of commensal microbiota on T cell apoptosis.

The researchers, led by June Round, first characterized the effect the microbiome had on T cell responses by comparing transcriptional profiles from CD4 T cells from the spleens of germfree and specific pathogen-free (SPF) mice. They found that a gene known as Erdr1, was highly upregulated in germfree T cells which suggests that having a microbiome (as in the SPF mice) suppressed Erdr1 in cells. Erdr1 has previously been found to have roles in NK cytotoxicity, metastasis and cellular survival but before this study, its role in T cells was largely unknown.

The study showed that Erdr1 suppression was dependent on Toll-like receptors identifying products from the microbiota and its mechanisms of action was to induce T cell apoptosis through caspase 3. Caspase 3 is part of one of the most studied death receptor pathways in T cells known as Fas. The antibiotic treated, germfree mice had higher levels of T cell apoptosis in the spelen and Erdr1-overespressing cells had upregulated genes with are involved in the Fas pathway.  Interestingly, the researchers found that changes in Erdr1 expression determined whether auto-reactive T cells would survive or not and also influenced the outcome of a neuroinflammatory autoimmune disease.

In summary, the researchers have identified how the presence or absence of commensal microbiota is able to influence T cell survival as well as the development and outcome of autoimmune disease. Therefore, Erdr1 has the potential to be manipulated in an autoimmune disease therapy.