Memory responses are not restricted to immune cells 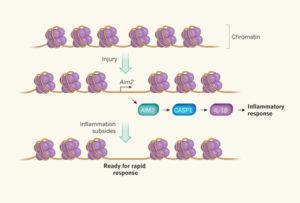 Epithelial stem cells (EpSCs) are cells responsible for the maintenance of the epidermis of the skin by developing into skin-cell lineages to repair wounds and replace damaged skin cells. Researchers have found that these EpSCs can retain memory of previous inflammtory responses. The mechanisms is through changes in chromatin which induce the transcription of certain stress-responsesgenes. This study is the first report to show that a non-immune cell can possess inflammatory memory.

Skin epithelial cells form an important barrier which protects from harmful environmental factors. EpSCs play an important role in the maintenance and repair of  the skin. The mechanism behind how epithelial cells endure constant damage but quickly regenerate was not well understood and this led Naik and colleagues to investigate this further. In particular, they examined how EpSCs respond to inflammation.

The researchers found that EpSCs from mice mounted a memory response after acute inflammation which increased the rate of skin healing. This memory response was independent of both macrophages and T cells. Interestingly, they found that regions of EpSC chromatin including the Aim2 gene (activates the inflammasome) were more accessible to transcription factors during inflammation and that these same genes were the first to be activated upon subsequent injury.

AIM2 makes up part of the inflammasome. It is responsible for secreting IL-1β through caspase-1. Il-1β has been found to be important in wound repair. The researchers found that the absence of the AIM2 protein as well as caspase-1 and IL-1β, resulted in EpSCs being unable to repair the wounded skin.  The researchers suggest that EpSCs may benefit from acute inflammation because this state triggers a fast, memory response to subsequent damage. However, this quick memory response may increase the likelihood of the development of autoimmune conditions and cancer. Studies have found that people with certain mutations in their inflammasomes have an increased risk of certain skin cancers.