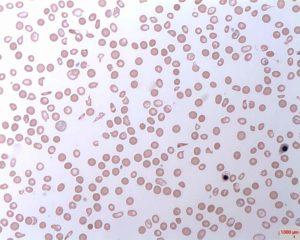 Plasmodium infection has been known to cause autoimmune anemia. Researchers have now uncovered the mechanism behind this. The team found that Plasmodium DNA was responsible for the induction of autoantibodies which target red blood cells. B cells which express CD11c and T-bet were the main producers of these antibodies. Toll-like receptor 9 (TLR9) and the IFN-γ receptor helped in the development of these autoreactive B cells. This study highlights the mechanism behind the induction of autoimmunity in responses to malaria infection.

Infectious diseases including malaria have been known to induce autoimmunity. The mechanism behind this is not well understood. One of the common autoimmune responses after malaria infection is severe anemia. This results in the loss of erythrocytes (red blood cells) and bone marrow suppression. Antibodies have been shown to target phosphatidylserine which is on uninfected erythrocytes. This then leads to the clearance of the red blood cells by macrophages.

Misguided and faulty activation of B-cell responses is likely the cause of a number of autoimmune disorders such as lupus. Toll-like receptors have been implicated in this process. TLR9 recognizes DNA and Plasmodium DNA is usually recognized by this receptor as a pathogen-associated molecular pattern (PAMP). Importantly, TLR9 has been found to contribute to autoimmunity.

The researchers investigated the mechanism behind this malaria-induced anemia in mouse models and ex vivo human peripheral blood mononuclear cells. They found that there were B cells which secreted autoreactive anti-phosphatidylserine antibodies after malaria infection. These cells expressed CD11c and the transcription factor T-bet. Interestingly, this antibody phenotype is similar to autoantibodies found in other autoimmune conditions. Three receptors were implicated in induction of these antibodies: IFN-γ receptor, TLR9 and the B-cell receptor.

The authors suggest that Plasmodium DNA PAMPs recognized by TLR9 activated these autoreactive B cells and caused the production of antibodies towards erythrocytes. This research may also explain how other infectious agents induce autoimmunity.