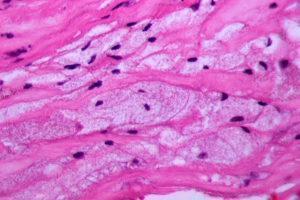 B cells play an important role in the immune response towards lipoproteins involved in atherosclerosis. Scientists have now discovered a previously unknown role for splenic marginal zone B (MZB) cells in response to a cholesterol-rich diet. The mechanism behind that was shown to be PDL1-dependent.

Atherosclerosis is the process whereby the arteries harden and narrow due lipid deposition. It may result in a heart attack or stroke. Atherosclerotic arterial lesions result in the activation of both the innate and adaptive immune response towards lipoproteins.

B cells play an important role in atherosclerosis. B1 cells produce IgM which has atheroprotective effects while B2 cells promote atherogenesis. Regulatory B cells from the B2 cell compartment control the adaptive immune response against the condition.  The two main B2 subsets are follicular B (FOB) and MZB cells. They develop very differently and do not have the same role in the immune response.

The role of MZB cells in the immune response towards a high cholesterol diet (HCD) was previously unknown and therefore researchers, led by Ziad Mallat aimed to investigate this further. The researchers used a mouse model of mice with a B cell lineage-specific deletion of the Rbpj gene. This gene encodes a protein that is essential for the production of MZB cells. They then gave LDL receptor-deficient mice bone marrow from either the MZB-deficient mice or control mice. These mice were put on an HCD for either 8 or 16 weeks.

Interestingly, in mice with MZB, the HCD diet upregalated MZB expression of PDL1 which is an immunoregulatory ligand. This mechanism was ATF3-dependent and resulted in MZB cells interacting with pre-Tfh cells. This further led to suppression of Tfh cell motility, altered cell differentiation, lower Tfh numbers and suppression of the pro-atherogenic Tfh cell response. These effects were all in a PDL1-dependent manner.

Altogether, these results reveal a novel role for MZB cells in the control of Tfh cell responses in the germinal center in response to an HCD. These results also shed light on how diet may contribute to the initiation of immune-mediated conditions.