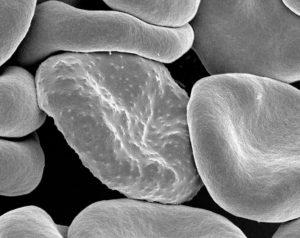 Malaria, a vector-borne disease transmitted by mosquitoes, causes flu-like symptoms in infected individuals. If let uncheck, severe symptoms, including seizures, coma, and even death, may develop. A particular health consequence, anaemia, is commonly found with malaria patients. Malarial anaemia can be caused centrally through lowered red blood cell production or peripherally through destruction of erythrocytes through haemolysis or phagocytosis. Artemisinin-based combination therapy (ACT) is the typical treatment for uncomplicated Plasmodium falciparum malaria; however, it has been implicated in reinforcing malaria-induced anaemia. Artesunate alone is commonly injected into severe malaria patients, but is also associated with acute delayed haemolytic anaemia. Due to the complex biological and ethical interactions, it is often difficult to attribute the cause of anaemia to malaria or malaria treatment specifically.

Nearly 90% of patients were treated using ACT and three-quarters of the patients were children under 5. Two-thirds of the patients initially had anaemia. Age positively correlated with haemoglobin levels and negatively correlated with anaemia prevalence. Patients with anaemia at the start of treatment significantly decreased with increasing age. Thus, young age was a risk factor for malaria-induced anaemia. Despite this, patients with treatment-initial anemia had statistically more frequent parasitological recurrence. Though very few, all patients with very severe anaemia were treated with ACT. All but one severe anaemia patients had recovered within 2 weeks and were considered transient. An analysis of treatment-initial parasite density was associated with lower haemoglobin levels. Paediatric malaria patients with a high parasitic load were at greatest risk of anaemia.

Analysis of several studies created a wide and robust view of anaemia malaria patients and outlined several interesting trends during the course of treatment. Understanding the role of ACT in malaria-induced anaemia can allow clinical and public health stakeholders the opportunity to optimize and personalize medical treatments to infected individuals and young children affected by anaemia.