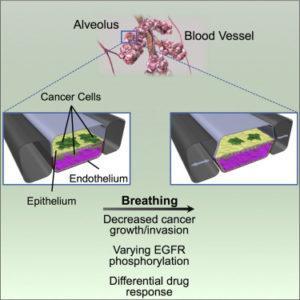 Current in vivo orthotopic cancer models in mice and in vitro human cancer models utilised to study cancer growth and therapeutic responses do not recapitulate pathology in patients. This highlights the need for an improved cancer experimental model that is able to mimic in vivo human responses.

Researchers from the Wyss Institute (Hassell et al.) developed an in vitro orthotopic lung cancer model utilising the lung on a chip technology, which is able to recapitulate tumor growth and therapeutic responses observed in patients. The lung on a chip is an example of the organ-on-a-chip technology that combines microchip technology with cell culture enabling tissue and organ functionality not possible with conventional 2D and 3D cultures.

Adenocarcinoma form of non-small-cell lung cancer (NSCLC) is an example of a tumor that exhibits differential microenvironment-dependent growth, where despite being present in the airway, it preferentially grows in the alveolar structures of patients. NSCLC patients respond well to reversible tyrosine kinase inhibitors (TKIs), but may develop resistance and eventually require treatment with irreversible TKIs. Hassell et al. aimed to determine mechanisms responsible for the differential microenvironment growth and treatment responses of NSCLC.

Hassell et al. developed two lung on a chip models that independently demonstrate functions and responses in either the airway and alveoli. They observed that the airway chip had significantly reduced NSCLC proliferation when compared to the alveoli chip, which they attributed to reduced breathing motion in the alveoli chip. Additionally, they showed that larger tumor clusters, increased active tumor migration and invasion through tissue boundary in static (non-breathing) alveoli chips when compared to mechanically breathing chips.  Finally, they showed that breathing motion suppress the ability of reversible TKIs to kill NSCLC, by downregulation of EGFR (reversible TKI target) and up-regulation of cMet (tyrosine kinase) in NSCLC resulting in reduced sensitivity of NSCLC to reversible TKIs therapy.

In summary, Hassel et al. demonstrate the impact of mechanistic breathing on microenvironment –specific growth of lung cancer in the alveoli and airway using the lung on the chip model, as well as therapeutic responses observed in patients.