Link between schistosomiasis and HIV susceptibility 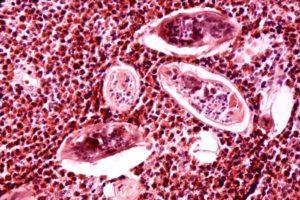 Schistosomiasis is highly prevalent in Africa, with approximately 218 million people being affected worldwide; 90% of infections occurring in Africa. The disease is caused by a parasitic worm which infects the pelvic and gastrointestinal venules of the host. The eggs of these worms migrate to the urogenital and gastrointestinal mucosa which results in inflammation. This inflammatory responses has been suggested to alter the susceptibility of the host to HIV and also affect the immune responses towards the virus after infection.

The team of researchers had two hypotheses. First, they believed that schistosomiasis infection would increase the risk of HIV infection and that this effect was different between men and women. The team also hypothesized that individuals with schistosomiasis had dysfunctional immune response towards HIV which would result in higher viral loads at seroconversion.

This study suggests that schistosomiasis may contribute to HIV acquisition and pathogenesis. Treatment of the parasitic worm may aid in reducing HIV incidence in highly endemic areas.