Targeting an integrin as a potential HIV therapeutic 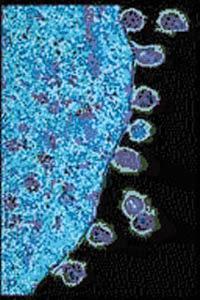 α4β7 is a gut-homing integrin which is another receptor used by HIV to enter cells. For this reason, it plays a critical role in the pathogenesis of the virus. Studies are focusing on antibodies targeting this integrin as an HIV therapeutic. Researchers from the National Institute of Allergy and Infectious Diseases, USA, have found that α4β7 incorporates into the viral Envelope and helps viral entry and homing in the intestines. This research further provides evidence that this integrin may be a key target for the next generation of HIV therapeutics.

Although anti-retroviral treatment (ART) can efficiently control HIV replication, this medication must be taken diligently for the rest of the infected person’s life to prevent viral rebound.  New HIV therapeutic targets are therefore needed to control the virus in an easier way. One such target is α4β7. This integrin is a receptor involved in CD4 T cell homing in the gut. Studies in non-human primate models have shown that giving the animals antibodies which target α4β7 controls their viraemia even in the absence of standard ART.

Although studies have shown the beneficial effects of anti-α4β7 antibodies, the mechanism behind α4β7’s actions was not well understood. This made the researchers, headed by Paolo Lusso, to investigate this mechanism further.

The researchers first used virion capture assays to understand the process of virion incorporation of host proteins. They used HIV from peripheral blood mononuclear cells which was obtained using monclonal antibodies targeting lymphocyte markers. These monoclonal antibodies were also used in the evaluation of protein expression using flow cytometry. The researchers found that HIV particles incorporate α4β7. Next, the team analyzed 12 HIV isolates and found that α4β7 is incorporated by a wide range of diverse HIV isolates . They found the same in SIV (the non-human primate version of HIV). The researchers also showed that α4β7 promotes HIV infection of cells and that HIV particles which had taken up α4β7 were selectively taken up by endothelial venules that are found in the intestinal mucosa.

In summary, the researchers shed light on the mechanism used by α4β7 to aid in HIV infection. The study further supports the use of anti-α4β7 therapeutics to control HIV infection and pathogenesis.