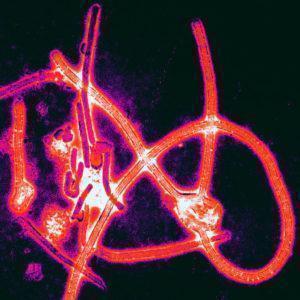 One of the hallmarks of Ebola virus (EBOV)  infection is a heightened immune response characterized by a “cytokine storm”. Researchers investigated the cause of this and found that T-cell immunoglobulin and mucin domain-containing protein 1  (Tim-1) plays a crucial role in Ebola pathogenesis. This protein is implicated in inducing this cytokine storm and therefore may be a good drug target.

EBOV infection results in rapid disease progression and many die before they can access healthcare. Understanding the pathogenesis of the disease is therefore important to decrease the rate of progression and the severity of the disease. Viral infections sometimes result in a cytokine storm in which over 150 cytokine may be induced in response to the infection. This phenomenon is detrimental to the body and affects treatment strategies, therefore there is a need to understand how to reduce this effect.

A large amount of EBOV replication takes place within innate cells; dendritic cells and monocyte-macrophage lineages. Since these cells have strong links with the adaptive immune system, both the innate and adaptive immune system is weakened. Despite EBOV being unable to infect lymphocytes, EBOV infection which results in death is frequently characterized by lymphopenia. Lymphopenia is a condition where there is a decrease in the amount of CD3+ T-lymphocyte populations.

Tim-1 is a protein that has been previously identified as an attachment factor for EBOV. Since Tim-1 has a role in envelope binding and modulates inflammation in other viruses, the team investigated whether Tim-1 had an effect on EBOV pathogenesis. Using Tim-1-deficient mice, the team found that Tim-1 did play a role in EBOV pathogenesis. Tim-1−/− mice had higher chances of survival after EBOV infection with less severe disease symptoms than control mice. Interestingly,  Tim-1−/− mice had only small decreases in viremia as opposed to controls which suggests that Tim-1 was linked to pathogenesis. The researchers also showed that the binding of Tim-1 and EBOV resulted in direct activation of primary T lymphocytes. These data suggest that Tim-1 plays a crucial role in inducing the cytokine storm associated with EBOV infection.

This paper shows evidence implicating Tim-1 in the induction of the cytokine storm following EBOV infection. Targeting this protein may be useful for an EBOV therapy to reduce the immune response and pathogenesis of the disease.