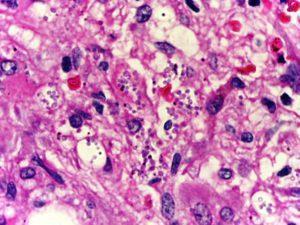 T helper (Th) 2 cells have been shown to be important in protection against Schistosoma mansoni while increasing susceptibility to Leishmania major. Researchers have now found that B cells which are responsive to interleukin-4 receptor alpha (IL-4Rα) and produce IL-4 play a role in the susceptibility to and protection from these two pathogens. This is a result of the IL-4 regulating Th2 polarization. This research highlights a previously under-appreciated role of B cells in the pathogenesis of these microbes.

Both leishmaniasis and schistosomiasis are neglected tropical diseases with insufficient therapies and no vaccine available. Therefore, understanding the host responses to these pathogens may aid in understanding how to better treat and/or prevent infections. The main role of B cell has traditionally been the secretion of antibodies. However, B cells also aid in antibody-independent mechanisms such as antigen presentation, organization of secondary lymphoid tissues and cytokine production. Regulatory B cells secrete Il-10 while effector B cells secrete cytokines including IL-4 and IL-13. However, the role of cytokine producing B cells in leishmaniasis and schistosomiasis was not well studied which led researchers from the University of Cape Town, led by Frank Brombacher to investigate this.

The team engineered BALB/c mice which lack the IL-4Rα on B cells. They specifically targeted this receptor on B cells by using cre-lox recombination technology. Mice which lack this receptor are unable to produce both IL-4 and Il-13 – cytokines which have been implicated in susceptibility to leishmaniasis and protection from schistosomiasis.

The researchers demonstrated that IL-4-producing B cells are not necessary in protection from leishmaniasis and their absence led to reduced susceptibility to the disease. The opposite was true for schistosomiasis as absence of these cells was detrimental to mouse health. The mice with B cells deficient in IL-4Rα  had mRNA cytokine expression in acute infection that was consistent with Th1 dichotomy and had impaired Type 2 responses. The researchers showed that the IL-4-producing B cells were important in inducing Th2 responses.

In summary, the study shows that IL-4Rα B cell signalling plays an important role in the immune responses towards both leishmaniasis and schistosomiasis – having opposite effects on protection from these two diseases. Vaccines and therapies towards these pathogens may need to target both the T and B cell arms of the immune system for optimal results.