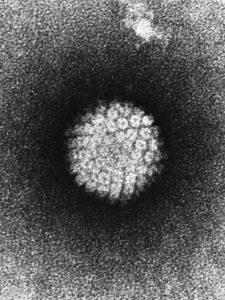 Human papillomaviruses (HPVs) are a major health concern as some types have been to shown to cause cervical cancer. Researchers from the German Cancer Research Center have now shown that low oxygen (hypoxic) conditions are often present in these HPV-positive cancers and that these conditions induce a dormant cell state. This dormancy is reversible upen re-oxygenation. This research explains how HPV-positive cancers can lie in dormant states, establishing reservoirs which can be re-activated. The data also explain why HPV-positive cancers may be hard to treat through chemotherapy.

Cervical cancer causes over 250 000 deaths per year worldwide and are caused by oncogenic HPV types. The high risk types of HPV include HPV16 and HPV18. HPV-positive cancer cells have been shown to require the expression of viral oncogenes, E6/E7. Suppression of these oncogenes leads to the induction of anti-tumour pathways which result in the arrest of cell growth. Therefore, these genes are of interest in the treatment of HPV-related cancer.

Low oxygen concentrations (hypoxia) are associated with many cancers and play a role in the development and progression of tumours. Hypoxia occurs when the oxygen concentration in a tissue is less than 1.5%. Hypoxia is advantageous to cancer cells as it can increase the resistance of the tissue to chemotherapy and radiotherapy. This led researchers to investigate how hypoxic conditions affect HPV-positive cancer cells.

The researchers found that HPV-positive cancer cells in hypoxic states down-regulated E6/E7. Despite this, the cancer cells did not die but went into a dormant state. Hypoxia resulted in the impaired signalling of mechanistic target of rapamycin (mTOR) through the the inhibitory REDD1/TSC2 axis. In this low oxygen environment, the cells were less susceptible to chemotherapy. The team found that this state was reversible as re-oxygenation resulted in cell proliferation and the expression of E6/E7 was restored.

Altogether, this study shows how cancer cells can survive and thrive in hypoxic conditions by changing into reversible dormant states. The study highlights the cross-talk between the host and HPV oncogenes and sheds light into how these cancers evade therapy. This study has implications on the development of E6/E7-based therapies.