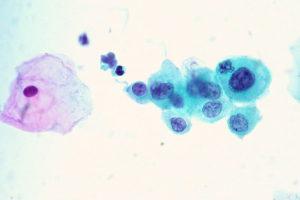 Human papillomavirus (HPV) is the most common sexually transmitted virus with up to 80% of the sexually active population becoming infected at one point in their lifetime. HPV contributes to the mortality and morbidity of populations, where prevention is scarce and infection can sometimes lead to HPV-associated cancers including cervical cancer. Viruses including HPV have the ability to manipulate host gene expression to avoid immune response by the host. It has been found that HPV oncoprotein E7 interacts with DNA methyltransferase 1, an epigenetic enzyme responsible for transferring methyl donors to DNA. Researchers have been investigating possible epigenetic effects of HPV since it the potential to regulate genes associated with tumour suppression and immunity. Keratinocytes, cells of the epidermis, are purported target cells of HPV. Colorado researchers investigated DNA methylation in keratinocytes to classify mechanisms influenced by HPV using global gene expression and methylation analysis.

Majorhistocompatibility complex class 1 (MHC-I) and human leukocyte antigen E (HLA-E) molecules were downregulated by E7 mediation. However, HLA-E was only affected by high-risk HPV, whereas low-risk HPV did not sufficiently downregulate the protein expression. These molecules are immunologically significant since HLA-E encodes for MHC subunit proteins and regulates NK and CD8+ T cells.