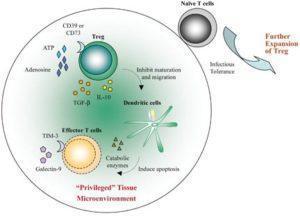 Regulatory T cells (Tregs) are known to reduce the immune response towards infection in the bid to dampen immunopathology. Researchers have now found a mechanism used by Tregs to control the extent of liver damage caused by cytomegalovirus (CMV). Liver Tregs do this by expressing high levels of ST2, a receptor for IL-33. IL-33 acts as a tissue alarmin, signalling tissue damage and inducing Treg cell expansion.

Tregs are CD4+Foxp3+ T cells which aid in the maintenance of immune homeostasis. In viral infections and cancers, these cells suppress the immune response and decrease the chances of the development of immunopathology.

Tregs in the intestines and adipose tissue over-espress ST2, which as a receptor for IL-33. IL-33 has a function in the differentiation of Tregs and othey lymphoctyes.

The researchers, led by Stipan Jonjic, investigated the role of liver Tregs in the regulation of liver damage caused by murine CMV infection. The authors infected BALB/C mice with CMV and analyzed the Treg response in the spleen and liver of the mice over 21 days.

The researchers found that the CMV infection induced Treg expansion in both the spleen and the liver although there were more Tregs in the liver. If the Tregs were depleted from the mice, the animals developed severe liver damage without any change to the amount of virus present in the liver. The Tregs in the liver expressed high levels of ST2 and ST2-deficient mice had reduced numbers of liver Tregs. ST2 deficient mice had substantially worse liver pathology and higher mortality rates.

Altogether, these data show the importance of ST2 and Il-33 in the expansion and maintenance of Tregs in the liver. Tregs were shown to reduce CMV-induced immunopathology of the liver.