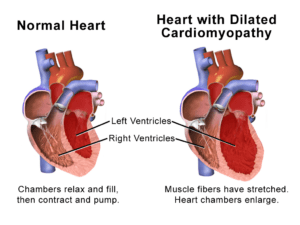 HIV infection often leads to cardiovascular disease, however, the mechanism behind this was not well understood. Researchers, led by Kamel Khalili, therefore investigated the drivers of HIV-associated cardiomyopathy and found that inhibition of the cellular quality control pathway by dysregulation of autophagy, mediated by HIV protein Nef, may be leading to the development of cardiovascular disease in HIV-infected individuals.

Nef is an HIV protein that is 27 kDa in size. It is located in perinuclear spaces as well as in the host cell membrane and in the cytosol. Nef is still expressed after initiation of antiretrovial therapy and secreted into the extracellular environment. It is very likely that is protein is located in the heart and other organs of HIV-infected individuals.

Autopaghy is a process of self-digestion of a cell and is important in maintaining cell homeostasis. Autophagy plays a role in removing faulty and damage organelles as well as helping in the process of protein quality control. HIV has been known to inhibit certain parts of the autophagy process to ensure the virus can effectively replicate in cells and increase its chances of survival. Before this study, little was known about the role of autophagy in the hearts of HIV-infected individuals.

HIV-associated cardiomyopathy  is a condition characterised by the abnormal functioning of the heart. This frequently leads to high morbidity and mortality in HIV-infected individuals. The virus has been detected in the heart but the mechanisms used by HIV to drive cardiomyopathy are not well understood.

The researchers hypothesised that Nef would impair autophay in cardiomyocytes (heart cells) resulting in a dysregulation in cell viability and cell death. They found that Nef dsyregulated autophagy and abolished autophagic flux. They used the mTOR inhibitor,  rapamycin, to see whether it would restore the autophagy process and found that the inhibitor restores autophagy flux and promoted autophagosome-lysosome fusion.

The study uncovers a Nef-dependent mechanism leading to HIV cardiomyopathy. The data suggest that rapamycin treatment may be able to aid HIV-infected individuals who are suffering from this condition. More studies, pre-clinical and clinical, should be performed to further investigate this option.