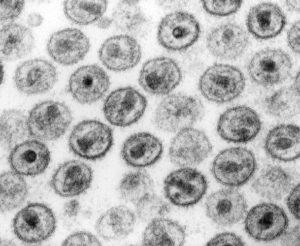 There is a class of broadly neutralizing anti-HIV antibodies which bind to the glycans on the V3 loop of the HIV Envelope (Env). Some of these antibodies are also very potent and therefore this epitope has become a main target for HIV immunogen design.

One challenge faced by broadly neutralizing antibodies in natural infection is that the host virus can rapidly escape from neutralization by mechanisms such as introducing key mutations in the antibody epitope or conformational masking.

Researchers led by Jayanta Bhattacharya, investigated how clade C viruses from one individual gained resistance to antibodies in the same patient’s plasma. The individual they studied was a slow-progressor whose plasma had antibodies which targeted the V3 loop glycans, specifically the glycan as position N332.

They sequenced the Env portion of the participant’s viruses and found that having longer Env V1 loops prevented antibodies specific to that site from neutralizing the virus – suggesting that the V1 loops obstruct access to the N332 glycan.

They also found one virus which was resistant to V3 loop-glycan antibodies due to the presence of an N332S mutation. This specific virus had shorter V1 loop lengths.

Altogether, this data highlights the diverse mechanisms used by HIV to evade neutralization through the glycans on the V3 loop. Understanding how viruses become resistant to antibody pressure may be important in the design of an effective immunogen.