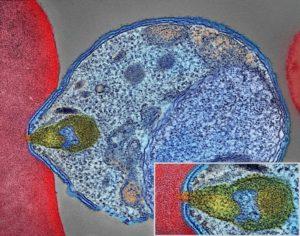 Malaria has remained major health problem in many developing countries especially sub-Saharan Africa. This has led to the search of an effective vaccine in order to eliminate or reduce the burden of malaria. Despite the ability of malaria infection to outmaneuver host immune response, there has been recent progress in malaria vaccine development. Recent studies have shown that immunization with small amount of erythrocytes infected by the WT P. falciparum, followed by drug treatment after 3 to 4 parasite developmental cycles, protects 4 out of 5 human subjects. However, the immunological molecular mechanism responsible for this protection is not well understood. To understand the molecular mechanism of immunological protection by live parasite, the researchers use P. berghei mutant that lacks gene encoding histamine releasing factor (HRF) (PbNK65hrfΔ). In their study, they showed that protection by (PbNK65hrfΔ) is dependent on CD4 T cells, reduction in CD4+PD-1+ and CD8+PD-1+ T cell numbers and increase in amount of central and effector memory B cells. They also showed that prior malarial infection followed by drug treatment doesn’t affect the effectiveness of PbNK65hrfΔ protection.

PbNK65hrfΔ is a mutant that lacks gene encoding histamine releasing factor (HRF). This mutant is known to cause self-resolving blood-stage infection and induce strong protection. HRF, a ubiquitous protein found in eukaryotes, has previously been shown to act as anti-apoptotic factor, and promotes allergies by releasing histamine. Elevated level of histamine in plasma and tissue has correlated with severity of plasmodium infection. In their previous study, they have shown that HRF causes increase in IL-6, which helps to boost T and B cells immune response.

The researchers treated PbNK65hrfΔ protected mice with normal mouse IgG, anti-CD8 or anti-CD4 depleting antibodies. CD4+ and CD8+ depletion was continuously monitored. Followed by introduction of RBCs infected with WT PbNK65 parasites into the mice. Measurement of parasitemia shows that there was uncontrolled growth of parasite only in mice treated with anti-CD4. This shows that CD4 is indispensable for defense against malaria infection. Also, when they analyze PD-1 expression on CD8+ and CD4+ T cells. They found that PbNK65hrfΔ parasites induced two-fold and four-fold fewer PD-1+ CD4+ and PD-1+ CD8 + T cells, respectively at day 6 p.i. PbNK65hrfΔ infection also leads to significantly higher total number of memory and GC memory B cells, central and effector memory B cells compared to mice infected with WT parasite.

This study shows that the molecular mechanism by which PbNK65hrfΔ provide long lasting protection is through the help of CD4 T cells but not CD8+ T cells, by significantly reducing CD4+PD-1+ and CD8+PD-1+ T cell numbers and increasing central and effector memory B cells numbers. And that PbNK65hrfΔ protection is still effective irrespective of previous malaria infection or drug treatment history.