Gonorrhoea superbug on the rise globally 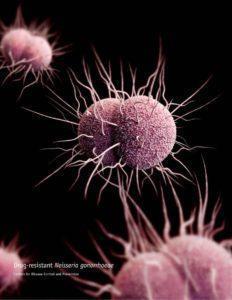 Gonorrhoea is an infection caused by the Neisseria gonorrhoeae bacterium that is highly transmissible through sexual contact, where women can have up to 70% risk of infection after sexual intercourse with an infected individual. Individuals with gonorrhoea may not initially present any symptoms, which further complicates diagnosis and transmission. With nearly 80 million people infected with gonorrhoea annually, its prevalence and spread is alarming. Though gonorrhoea is curable, it does not diminish the current global health crisis.

Recently, researchers are calling for international action against antimicrobial resistance in N. gonorrhoeae (AMR gonorrhoea). The WHO and researchers worldwide have reported the increased prevalence of drug-resistant gonorrhoea, where almost all 77 reporting countries discovered ciproflaxin-resistant strains and 80% of countries had azithromycin-resistant strains. Two thirds of countries claim that they have identified strains that are also resistant to last resort treatments, including extended drug treatment of extended-spectrum cephalosporins (ESC)s, oral cefixime or injectable ceftriaxone. This has been confirmed in both in vitro and clinical studies for ESCs and has been identified as a major danger regarding AMR. Unfortunately, most countries rely on ESCs as the only available effective single antibiotic for gonorrhoea treatment. The WHO indicates that resistance can often be attributed to the use of older and cheaper antibiotic treatments. France, Japan, and Spain have also reported “gonorrhoea superbug” cases. With the three implicated countries classified as high-income, the burden of the superbug is likely to be much bigger than currently reported.

The race against AMR gonorrhoea is long, where there are currently only three candidate drugs against gonorrhoea, but none have reached standardized patient use. Furthermore, the selection of drugs alone is not enough. The WHO Global Gonococcal Antimicrobial Surveillance Programme (WHO GASP) has suggested that reinforced and effective treatments can be developed through studying how the drugs are utilized and setting treatment guidelines. The programme has also encouraged awareness of prevention methods, including safer sex practices. Additionally, practical diagnostic tests are essential, considering gonorrhoea’s asymptomatic nature. Though the development of a vaccine is suggested to be the most effective and sustainable method of disease control, the recognition and tracking of AMR gonorrhoea will allow research and development within pharmaceutical and immunological fields.

Wi et al. calls for population-based surveillance, including monitoring of antimicrobial use and treatment failures, which can be helpful measures of the AMR gonorrhoea trends. The WHO GASP outlines a comprehensive approach to tackle AMR gonorrhoea, which encompasses research and development, prevention surveillance, diagnosis, and complete reporting.