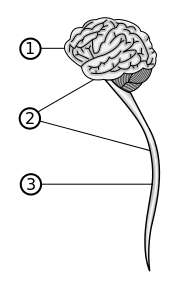 Certain autoimmune conditions such as multiple sclerosis (MS), hystiocytosis and rheumatoid arthritis, have been associated with dysregulated cytokine production in animal models and patients. Recently granulocyte-macrophage colony-stimulating factor (GM-CSF) has been identified as a cytokine critical for the ability of Th17 cells to drive inflammation in the central nervous system (CNS) and other tissues. However, the specific role of GM-CSF in orchestrating the process of autoimmune inflammation has remained unclear. In their article, Spath et al. used a transgenic model for inducible GM-CSF expression to explore how abnormally increased production of GM-CSF leads to immunopathology.

Although GM-CSF is produced by multiple cell types in vivo, T cells seem to be the most abundant cell type producing GM-CSF. Notably, upregulated GM-CSF production by T cells was reported in the brain and blood of MS patients. Therefore in their study Spath et al. modeled a phenotype that would most closely mimic an autoimmune disease state manifested by up-regulated GM-CSF through induction of GM-CSF in CD4+ T cells. While several groups had previously tried to create models of dysregulated GM-CSF production, global and constitutive expression of GM-CSF led to premature death of animals in these experiments. To circumvent this barrier, Spath et al. generated a transgenic mouse model that employed conditional tamoxifen (TMXF)-inducible expression of GM-CSF. They then crossed this mouse model with a mouse line harboring a Cd4-creERT2 promoter, allowing them to direct GM-CSF expression to CD4+ αβ cells.

The authors report that after a 4-week treatment with TMXF, which induced abnormally high production of GM-CSF, Csf2CD4 mice, but not controls, developed severe neurological deficits. Interestingly, the authors did not observe this in a IL-17a inducible mice line and therefore concluded that the effects observed in the Csf2CD4 mice were due not only to inflammation but also to specific increases in GM-CSF. By varying the length of TMXF treatment and through titration of GM-CSF secreting cells, the authors demonstrate that once GM-CSF levels reach a certain threshold, neurological deficits were inevitable.

The authors then used immunohistochemistry to visualize leukocyte infiltrates in the CNS of the diseased Csf2CD4 mice. Myeloid cells were the predominant cell type in the infiltrates but T cells were rare. The infiltrations similar to those documented in MS patients were observed in the meninges and brain stem parenchyma of Csf2CD4. These findings demonstrated a specific pattern of myeloid cell infiltration associated with the observed neurological deficits.

Although subsequent histopathological analysis revealed that multiple organs had immune infitrates of varying size, only the CNS showed signs of tissue damage and the highest increase of CD11c+MHCII+ inflammatory myeloid cells. Detailed analysis of cellular infiltrates in the CNS also showed destruction of astroglia and its replacement by invading phagocytes. The observed destruction of the CNS was associated with higher production of proinflammatory cytokines and reactive oxygen species in the brain stem.

To further investigate why phagocytes infiltrating the CNS cause more damage than those invading other tissues, the authors performed transcriptome analysis of stromal cells from the CNS and lung and of purified inflammatory myeloid cells from multiple tissues of Csf2CD4 mice. Expression analysis of stromal cells identified more differences in the CNS compared to lung, suggesting a stronger influence of tissue microenvironment on the disease phenotype in the CNS. Interestingly, the inflammatory myeloid cells from the CNS had very distinct expression profiles from their counterparts in the spleen, lung, liver and kidney, corroborating the notion that the CNS invading phagocytes have distinct effector functions. Among the metabolic pathways that showed most difference between the phagocytes in the CNS and other tissues, was lipid metabolism and phagocytosis, which could contribute heavily to tissue damage in the lipid-rich CNS.

In summary, induced up-regulation of GM-CSF production in this study led to infiltration of various tissues by proinflammatory myeloid cells, subsequent injury of the CNS and ensuing neurological defects. Although some mild damage to non-CNS tissues could not be fully excluded, the CNS was most dramatically affected by the dysregulation of GM-CSF. In the light of several clinical trials testing monoclonal antibodies that can neutralize GM-CSF or GM-CSF receptor as a potential therapy for autoimmune disease, the current work has important implications.