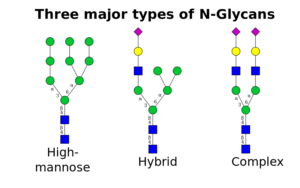 N-linked glycans on the HIV Envelope (Env) surface serve multiple purposes including shielding the virus from antibody responses. Some broadly neutralizing antibodies (bnAbs) are able to bind to these glycans. However, glycan heterogeneity has been a big problem in HIV immunogen design. Scientists from the University of Kansas have identified a glycan “consensus” based on 11 HIV trimers. This may aid in designing an immunogen able to elicit bnAbs targeting these sugars.

One of the main roles of glycans on the HIV Env is to protect against antibody neutralization thus earning the name the “glycan shield”. However, some broadly neutralizing antibodies, including those which target the V3 loop, V2 loop and gp120-gp41 interface are able to neutralize through binding to or stabilization by glycans in those regions. Unfortunately, the HIV glycans are extremely heterogeneous. The type of glycan found at a specific site is heavily influenced by a variety of factors.

Scientists, led by Heather Desaire, used the mass spectrometry to determine the glycosylation profile of 11 HIV Env trimers. Interestingly, their analyses revealed that most of the glycan sites on the HIV Env were conserved. They also identified several factors could influence the type of glycan found at a particular site, for example, the type of cell the trimers were produced in and truncating part of Env. Different protein purification methods did not appear to affect the type of glycan found at a site. They found that the gp41 region had more glycan variability as compared to the gp120 region of the HIV Env.

By doing this the researchers were able to map out a profile of the sites with conserved glycans. They were also able to identify what factors influence glycan heterogeneity. This paper may provide information needed to design an immunogen with the relevant glycans necessary to elicit a strong antibody response.