Evidence for antibodies in control of HIV infection 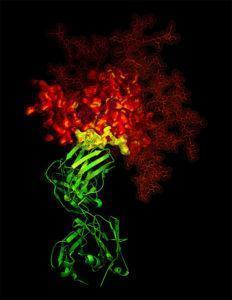 Researchers from Rockefeller University have described a patient who has both broadly neutralizing antibodies against HIV as well as autologous viruses which are sensitive to those antibodies. This phenomenon is very rare and gives insight into the antibody-virus interplay in HIV natural infection.

In most instances, people who develop broadly neutralizing antibodies in HIV natural infection have a worse prognosis than those who do not. These individuals usually have higher viral loads and lower CD4 counts. The fact that they produce broadly neutralizing antibodies may be because they have a large amount of viral strains in circulation which provide pressure towards the antibodies and cause them to mutate at a higher frequency, increasing the chances of the development of breadth and potency. This has led some researchers to believe antibodies do not play a role in controlling HIV infection and only CD8 T cells are responsible for viremic control.

The researchers went on to immunize humanized mice with a cocktail of the 3 antibodies from this elite controller. They injected the mice with HIV and after 10-14 days they administered one dose of the antibody cocktail. They found that the antibodies lowered the viral load of the infected mice with no viral rebound observed for more than 20 days.

Overall, this study shows that broadly neutralizing antibodies may play an important role in controlling HIV in infected individuals in association with CD8 T cells. The study also sheds light into the interplay between antibody and virus. The antibodies obtained from this individual may prove effective in human studies and may be used for HIV therapy.