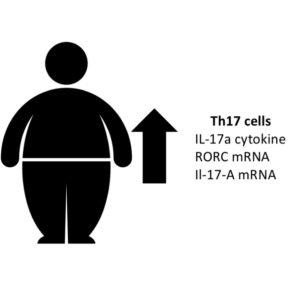 Obesity -a risk factor for allergic and autoimmune diseases in children- is hypothesised to contribute to low levels of chronic inflammation with increased lymphocyte infiltration in adipose tissue. The exact mechanism of this immunopathology is relatively unknown.

Th17 cells, a CD4+ T helper phenotype characterised by expression of RORC, transcription factor, and production of IL-17 cytokine, are important for clearance of pathogens such as fungi, as well as play a role in autoimmune and allergic inflammation. Studies of obesity in mouse models have illustrated that Th17 cells contribute to sustained chronic inflammation in these mice. Elevated levels of Th17 cells have been observed in the spleen and adipose tissue of obese mice compared to normal weight mice, further suggesting a role in chronic inflammation. Additionally, studies have shown an increased proportion of Th17 cells in peripheral blood from children with obesity and diabetes mellitus. However, these studies did not control for potential co-morbidities with chronic inflammatory and/or autoimmune diseases, conditions typically associated with increased Th17 T cell function.

Schindler et al. observed significantly higher frequency of Th17 cells and increased mRNA expression of RORC and IL-17A in overweight children compared to non-overweight children. Interestingly, they did not observe a linear correlation between BMI and frequency of Th17 cells in the children they studied, an observation they attributed to low sample size.